2019 One Member One Discipled Soul Launched 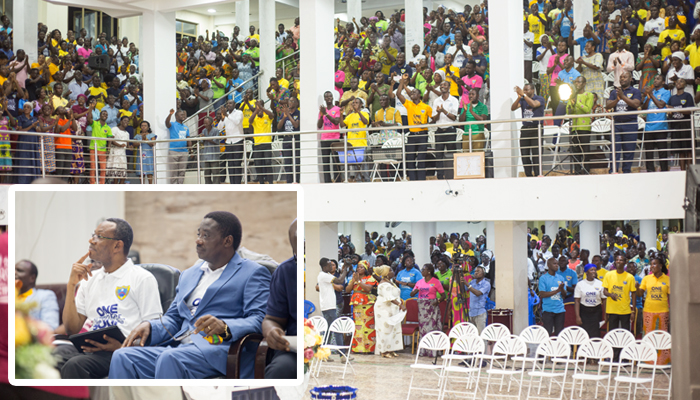 2019 One Member One Discipled Soul Launched

A colourful ceremony has been held in Accra to launch the 2019 One Member One Discipled Soul (1M1DS) project of The Church of Pentecost, with a clarion call on every member of the church to win at least a soul for Jesus Christ by the end of the year.

The launch, which took place at the auditorium of the Kaneshie Central Assembly on Friday, September 20, 2019, was performed by the General Secretary, Apostle Alexander Nana Yaw Kumi-Larbi, on behalf of the Chairman, Apostle Eric Kwabena Nyamekye.

Present to assist the General Secretary was the Director of the Evangelism Ministry, Apostle Dr Amos Jimmy Markin, whose ministry is the main implementers of the 1M1DS project.

With the launch, the leadership of the church in collaboration with the Evangelism Ministry is giving each member of the church the opportunity to rekindle their love for soul winning. The months of November and December have been set for rigorous soul winning at all levels of the church.

In a short address, the General Secretary noted that anytime the church is poised for evangelism, the heavens open, where signs and wonders abound.

He averred that evangelism is a way of life and that every true Christian should live it. According to him, it is the core of the work Jesus gave to His followers in Matthew 28.

Apostle Kumi-Larbi disclosed that the maiden 1M1DS was launched in 2017, and stated that this year’s launch is meant to reignite the zeal of the members towards personal evangelism in order to snatch many perishing souls from eternal damnation.

The General Secretary was hopeful that winning 1,000,000 souls for Christ by the close of the year was achievable if all members of the church got involved and made personal evangelism a priority.

The Evangelism Director, Apostle Dr Amos Jimmy Markin, in an exhortation on the topic, “Laity Involvement in Evangelism: The One Member One Discipled Soul” based on Matthew 18:11-14, Mark 16:19-20, stated that, “evangelism, church planting and missions in The Church of Pentecost, is not the preserve of some specialised few.

“It has never been so in our church before, but rather the work of the end-time church populace including the clergy and the laity.

Apostle Dr Jimmy Markin indicated that the Lord is not asking much from the members, but only one soul which is achievable.

Touching on the essence of the 1M1DS, the Evangelism Director mentioned that the launch of the programme marks a period of re-enacting into action across the frontiers of the church.

“The aim of this project is basically two: First, as part of the church’s five-year vision of possessing the nations, every member would have the opportunity to make at least one disciple for Christ by the end of the year. Second, every member would be equipped to have evangelism as a lifestyle and also be consumed with the zeal and passion for souls as our forebearers did,” he pointed out.

Earlier in a welcome address, the Kaneshie Area Head, Apostle Mike Etrue, said that the church’s vision of possessing the nations where every member is to be equipped with Kingdom values and principles to impact their spheres of influence, places a huge responsibility on the members to consciously plan and work towards fulfilling the Great Commission.

To ensure the effective implementation of the 1M1DS project, the Evangelism Ministry commissioned a group of dedicated young men and women called ‘Pentecost Gospel Heralds’ whose job is to primarily spread the gospel of Jesus Christ during organised crusades and rallies embarked upon by the ministry in any part of the country.