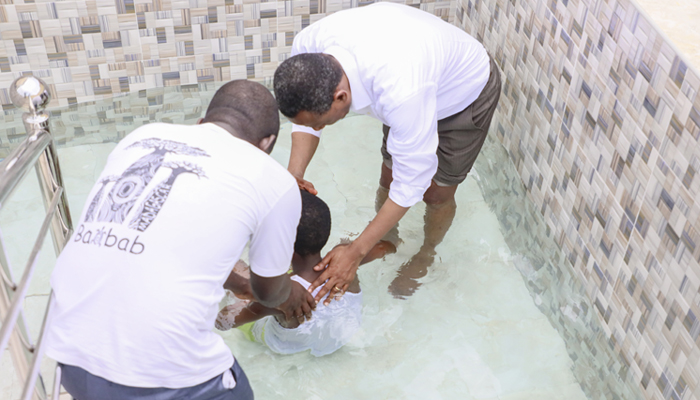 Sixteen people surrendered their lives to Jesus Christ on Sunday, March 10, 2019, during a Gospel Sunday service held by the Born Again Worship Centre in the Achimota Area of The Church of Pentecost to climax this year’s McKeown Missions Week.

The General Secretary of the Church, Apostle Alexander Nana Yaw Kumi-Larbi, who was accompanied by his wife, Mrs. Rose Dansoa Kumi-Larbi, joined members of worship centre to observe the annual celebration which coincided with the third Gospel Sunday service of the year.

Speaking on the topic: “Jesus Christ; the Destiny Changer” with Psalm 30:5, 11 and Luke 7 as scripture references, Apostle Kumi-Larbi stated that only Jesus Christ has the transforming grace for every soul, regardless of one’s state of being.

He, therefore, advised the congregants not to go to any other spiritual being for assistance other than Jesus Christ.

The General Secretary noted that sin is the root cause of all the ills and troubles that has plagued the human race. He, however, said that Jesus Christ came down to earth to stand in the gap and atone for the sins of all humankind. As a result of this, anyone who believes in Jesus Christ is guaranteed everlasting life.

He further said that Satan through deception and sin created enmity between God and humans and that is the cause of all the problems of the world.

“However, when you encounter Jesus Christ, He gives you life, joy and He rescues you from darkness into His glorious light,” he said.

“Jesus Christ reveals the Father. To enable us come back into fellowship with God, He takes away our sins and destroys the works of the devil. He also reveals God’s love and restores our souls,” he added. (I John 1, 2 and 3)

Apostle Kumi-Larbi said that Jesus is the game-changer, because He is the only Saviour of every soul and the only One who can change or transform lives for the better.

“In your difficult moments, don’t run away from Jesus. Don’t kill yourself. Come to Him. There is hope in Him. It is only Jesus who can move you from a state of hopelessness to one of hope,” he said.

The General Secretary concluded his sermon by encouraging the members to try Jesus Christ and have a divine encounter with Him.

Together with the Resident Minister, Pastor Isaac Annor, the General Secretary baptized 24 people in the new baptistery, including the 16 souls won.

It is worth noting that some persons who followed the live broadcast of the event on Pent TV and the official Facebook page of The Church of Pentecost (@thecophq) also responded to altar call by accepting Jesus into their lives while others rededicated their lives to Christ.