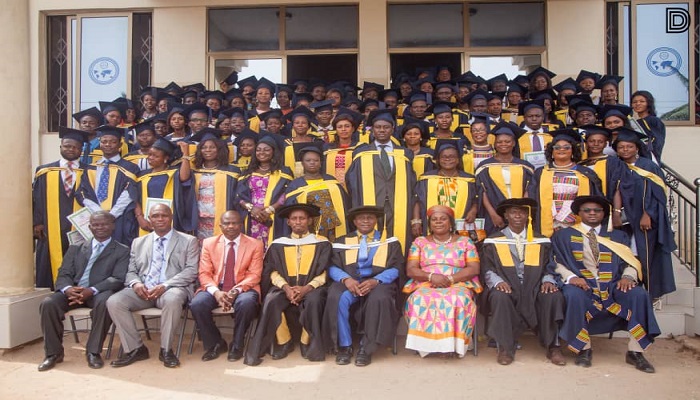 A total of 127 students have graduated from the maiden Marriage School held at the Sowutuom District in the Odorkor Area of The Church of Pentecost.

The school which was the brainchild of the District Minister, Pastor Samuel Yaw Asare, was designed to help both married and unmarried persons to understand the rudiments of marriage.

For the unmarried participants, the school offered them the opportunity to go through the Marriage Handbook of The Church of Pentecost as a preparatory stage towards marriage.

The school which was formally launched on 5th May, 2018, spanned over a period of eight months and was ran on Saturday evenings. Non-members also enrolled in the school.

The graduation ceremony took place on December 30, 2018, and was attended by Apostle Patrick Aseyoro, Odorkor Area Head and his wife Mrs Roberta Aseyoro, and Apostle Johnson Agyeman Baduh (Rtd), the immediate past Area Head, and his wife.

Speaking on the theme, “Christian Marriage in a Contemporary World,” Pastor Asare expounded the doctrine of The Church of Pentecost on marriage and said it was a divine establishment.

He said whilst God instituted marriage in the Garden of Eden in the Old Testament, Jesus attended a marriage ceremony at Cana in the New Testament.

“Due to the divine purpose of marriage, the Executive Council of the Church has amended the tenets to include Marriage and Family Life,” he emphasised.

According to the District Pastor, the contemporary world had embraced all sorts of unions such as same sex marriage which they deemed as forms of marriage. This, he said, has led to the surge in premarital and extra-marital affairs, as well as high rates of divorce among married couples.

“It is in the light of these challenges that the essence of Christian marriage has become very paramount,” he noted.

Pastor Asare called on the graduands to make use of the new skills and knowledge they have acquired at their homes and become agents of change in their marriages and relationships.

Topics treated at the school included the purpose of marriage, love in marriage, child care, inheritance in marriage, personal hygiene, and dealing with childlessness. Others were communication in marriage, managing finances in marriage, Christian courtship, sex and romance.

To the glory of God, six students got married when offering the course.